Our racers concentrate on just one thing, the stopwatch.

We’ve been part of the racing world for a long time.
Our Engineers attend races to give technical support that is key to winning races where every hundredth of a second matter.
Since the 2019 Fort William World Cup, the Commencal/Vallnord Team riders were on a new Supreme adaptation.
It had its first race, first win under Amaury Pierron.
To be followed by two other beautiful victories in Les Gets and Lenzerheide.
All of this experience gained at the races finds its place in our range of bikes.
We are offering you none other than the possibility to ride the same bike as Amaury and Myriam Nicole.

Rolled onboard throughout the 2019 season by Amaury Pierron and Thibaut Daprela, the SUPREME DH 29 TEAM is made for winners! Behind these handlebars, Momo won three World Cups and Titi won the overall title in Junior men’s category. The RockShox ULTIMATE go perfectly with the two-tone red BoXXer/chalk grey frame finish of this model. We have all the best bits here – SRAM CODE RSC 4-piston super powerful brakes, E13 LG1 + DH wheels and a SRAM GX 7-speed transmission. A modern model, inspired by our modern riders! 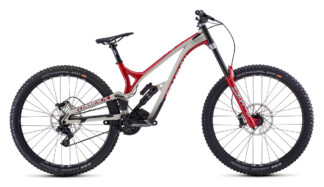